Why fish are disappearing from Amazonian waters 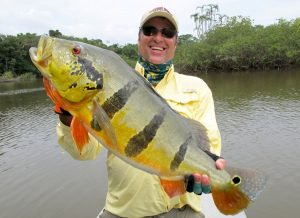 FISHING is one of the main activities in the marine extractive reserves in the state of Pará, a part of Amazonia whose landscape is composed of mangroves, small waterways and ocean beaches — not exactly the image that comes to mind when one thinks of the rainforest.

“They talk about the Amazon as if it were only made up of rainforest on high ground,” says Célia Regina Nunes das Neves. She is a fisher, a shellfish gatherer, community leader and an important networker on the national level in the fight to defend the way of life in traditional fishing communities. Neves lives in the village of Umarizal, located in the Mãe Grande de Curuçá Marine Extractive Reserve — one of the 12 marine extractive reserves in the state lying between Salgado in Pará and Caetés.

Nonetheless, fishers in the communities report that it is increasingly difficult to catch the fish they depend on for their livelihoods. One of the main explanations for the lack of fish, according to the people living in the region, is that industrial fishing is preventing traditional fishing from being practiced as it was in the past. Local fishers tell of large fishing ships trawling with nets up to 30 km (18.6 mi) in length, a method that prevents the fish from getting close to the shoreline.

“They only stop in April because IBAMA [the Brazilian Institute of Environment and Renewable Natural Resources] shuts down trawling [during the spawning season]. Then they start up again in May and fish till there’s nothing left,” says Antônio Bispo do Rosário, who lives in the village of Tamatateua — one of the 43 communities making up the Caeté-Taperaçu Marine Extractive Reserve in northeastern Pará.

“They only take the fish that the companies use. What they don’t use, they throw away. This should be outlawed, outlawed!” he says. In other words, smaller fish or species with low commercial value that could be eaten by local populations, and even fingerlings still in their growth phase, are simply thrown back into the ocean dead.

One of the traditional techniques used locally is a sort of trap called currais, which is composed of a small fence oftentimes surrounded by nets and made of poles fixed in the bottom for catching fish. Neves explains that “the fish don’t come any more” to the currais located closest to their village. “The fish we eat, which is the corvina [Atlantic croaker], has disappeared, and we barely catch any gó [small-scale weakfish] anymore,” says Neves.

A fisher for 41 years in the village of Tamatateua, Lourival Alves da Silva relates other issues creating challenges for fishers in the region: the high cost of gasoline and the fact that the people fishing no longer own the boats they use. As they have to travel farther and farther away from the shore to be able to find fish, many fishers have had to find larger boats to do their work. A medium-sized canoe can cost between R$12,000 and R$14,000 ($2,254 and $2,630), and those without the resources to buy their own boat must divide half of their catch with the owner of the boat they use to fish.

“So the people who go out to fish pay [for the boat] with half, and then split the other half among themselves,” explains da Silva.

Aggressive fishing practices together with climate changes are affecting local bird populations as well, with unexpected consequences for the fish and the health of local fishing populations. Neves explains that “the migratory birds that come here aren’t returning. And we’re concerned about this because these migratory birds help to balance out these species.”

She explains that the birds feed on a parasite called “fish lice” (argulus) by the locals. This parasite attaches itself to the fish’s gills or head, causing it to lose weight or even die. The people living here have noticed that, given the reduced numbers of birds, more fish are becoming infested with the parasite.

According to Marly Lúcia da Silva Ferreira, national secretary of women for the National Marine and Shoreline Extractive Reserve Reinforcement Confederation (CONFREM), the difficulties that fishing villages are facing have driven many to farming on land with unfavorable, sandy or clayish soil.

“When there aren’t enough fish and the [person living here] doesn’t have any way to make his living, he will have to go somewhere else and find other options,” says Ferreira, who also lives in Tamatateua.

The lack of fish is driving entire communities to migrate. One option is to move to the mangroves, where they can eat crab. “But if there are no limits set for the capture of these crustaceans, no management, what will happen? They will end,” says Ferreira.

This is why territory and food security are inseparable for her and for the fishing communities on the Amazonian coastline. And it is why they are calling for the preservation and expansion of the Marine Extraction Reserves. “We really are the environment where we live, the environment of the tides and the mangroves. The food produced in these places is the way we organize our economy, the way we organize our sustainable food and our homes,” she says.

According to researcher Victoria Isaac, who coordinates the Fisheries Biology and Aquatic Resource Management Laboratory at Pará Federal University, the species that are most valuable on the market are indeed those at most risk. However, she points out that the lack of scientific studies and research funding cuts make it hard to understand how big the problem really is.

“The information I’m giving you are individual studies based on old studies from 2007. It’s 2022 — that means 15 years without real numbers,” she says.

Isaac lists the saltwater species most affected by human activities on the Pará coast: lobster, snapper, shrimp and the acoupa weakfish. Each is at risk for different reasons. “Each resource depends greatly on its life history, its sensibility and how vulnerable it is to overexploitation. The slower a species’ growth and the longer its life cycle, the more vulnerable it is,” explains the biologist.

Still, the devastating effects caused by shrimp harvesting affect other species equally. Even though they have a short life cycle and the species isn’t overexploited, the way in which the animals are caught — with trawling nets — causes enormous amounts of environmental damage and kills off a number of other species.

“As a rule, for each kilo of shrimp you eat, about 5 kilos [11 pounds] of saltwater fish was thrown out because it had less economic value, and the hull of the boat was already full,” she explains. Isaac sees these deaths as unnecessary, in addition to the fact that they directly impact the lives of families who depend on artisan fishing and the fish that are thrown away.

Another problem associated with shrimp production is the impact of shrimp farms on mangroves, which are cut down to build the facilities. This in turn affects the natural crab populations that live in the mangroves, which have become the main source of food for many fishing communities where the fish are overexploited.

In addition, Isaac explains that the sediment washed out to sea from mangroves is ecologically important, as it feeds maritime species.

If mangroves are important because crabs proliferate among their roots, the riparian vegetation along the rivers in the Amazon plays a similar role in the reproduction of freshwater fish. “Riparian forests protect the young [fish], providing them a safe place to live,” says Isaac.

“If there is no more forest, the rains wash away the soil, and this soil will run into the river,” she explains. “There are a number of studies showing that on the long term — over 50 or 100 years — the entire dynamic of the river will change because there is no forest.” The transformation of the forest into pasture or soybean and corn monoculture, for example, directly affects fish reproduction.

Hydroelectric dams, in turn, are a threat to fish inside the rainforest because they interrupt migratory flows, “genetically impoverishing the populations, isolating the populations above [the dams] from those below, creating subpopulations,” says Isaac. According to her, there are cases in which the hydric changes in the river are so great that certain species leave or are unable to live together in the environment. The species are then substituted by simpler ones that don’t migrate or that don’t need wetlands or flood forests (igapós) to reproduce.

This phenomenon can be seen in the Xingu River, which, obstructed by the Belo Monte dam, is declining in fish reproduction.

Adalberto Luís Val is coordinator of the National Institute of Science and Technology’s Center for Amazonian Aquatic Adaptation Studies (INCT-Adapta). The center focuses on environmental and climate changes and their relationship with important social issues like health and food safety. According to Val’s estimates, “Fish is the protein source for 90% of the population in this region.”

In these laboratory trials, Val and his team found that in order to deal with the challenges associated with climate change, the Amazonian fish try to adapt. Those that survive the high death rates observed underwent significant skeletal changes, mostly in the most drastic scenarios.

In the specific case of the tambaqui, (Colossoma macropomum) one of the fish most eaten in Amazonia, “up to 40% of the animals show some type of skeletal deformation when exposed to the most drastic scenarios,” says Val. A paper published in Ecology and Evolution shows that the main skeletal deformations are scoliosis, kyphosis and changes in jaw structure, among others. This means that “these animals in their natural environment would not be able to fight off their predators, therefore, this part of the population will disappear.”

Outside the controlled experimental environments, Val and his team have also observed alarming effects of climate change in the rainforest: Increased temperatures and lowered water pH and oxygen levels are posing considerable challenges for species. Among those most susceptible are those in the order Characiformes, in which the species most consumed in the Amazonian diet are found, like the tambaqui: “These species are already living very near to their maximum temperature limits,” says Val.

The researcher cites some species from the Characiformes order in the Rio Negro, which cuts through the northwestern Amazonas. The maximum critical temperature for some of these fish is 31 and 32 C (87.8 and 89.6 F). “If you look at the average high temperatures of the Rio Negro, it reaches 33 C (91.4 F). In other words, if we were to have a small temperature increase in the overall system today, these species will be facing an extremely serious problem to be able to adapt to the higher temperature.”

In parallel, the pH in river water is lowering, causing them to become more acid as increased CO2 in the atmosphere dissolves in the water, forming carbonic acid.

Finally, climate change tends to result in water with lower oxygen levels. “Any time you dissolve a new gas into water, you dislocate the other gases. And the easiest gas to dislocate quickly is oxygen,” says Val.

He also points out that none of these changes occur independently, but rather an interaction occurs between these changes in the character of the rivers with the effects of the local human activities described above. “You are going to bring a monumental challenge to the species living in these regions.”

“It is a huge challenge for you to mess with this protein source. Because this threatens the food security of the people who live here. In Brazil alone … there are nearly 50 million people,” says Val.

Decarbonising the energy system by 2050 could save trillions

Road in Nilgiris to be redesigned for free movement of...