The haunting melodies of Calicut Kalamandir, a music club run by Valiyangadi labourers

MusicThe Calicut Kalamandir music club is a place where a few music lovers, most of who work in Kozhikode’s Valiyangadi market, assemble after a tiring day’s work to sing.Haritha JohnPhoto : Special ArrangementSomething that the people of Kozhikode... 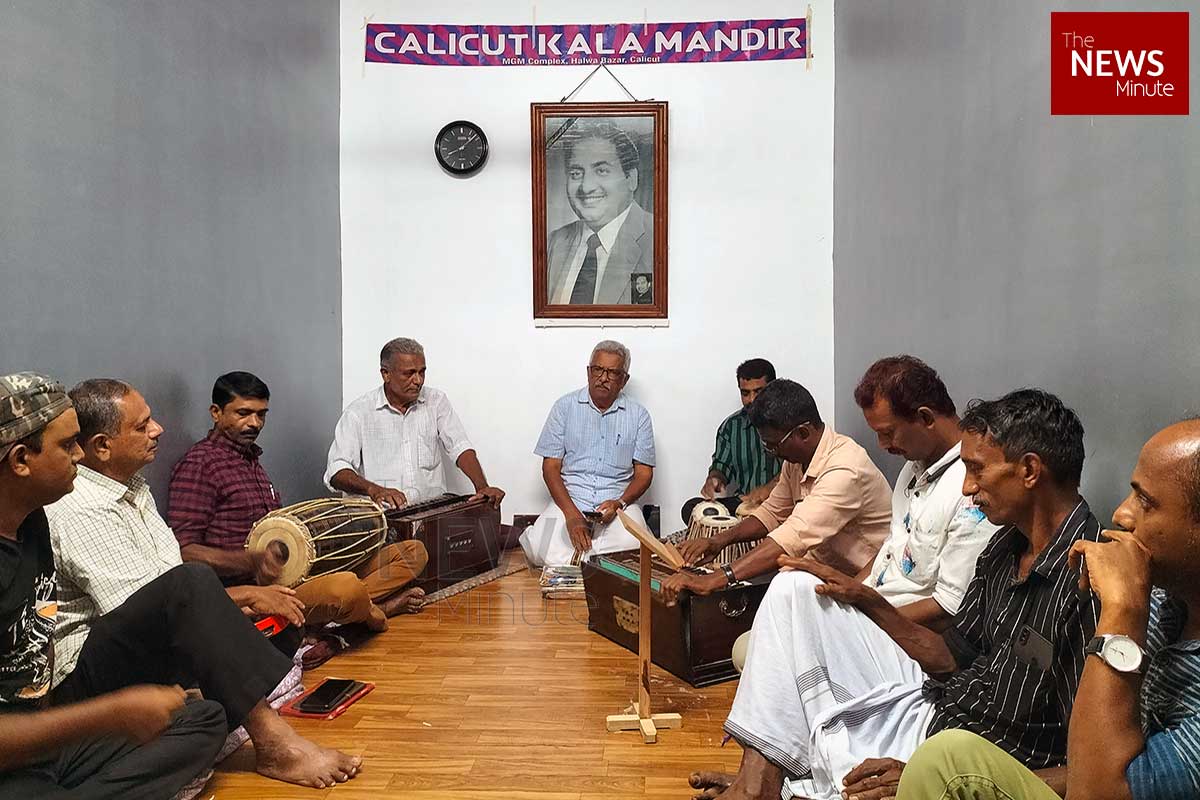 SOMETHING that the people of Kozhikode take pride in and hold close to their hearts is legendary musician MS Baburaj and his songs. A pioneer in composing Hindustani ragas and ghazals in Malayalam lyrics in the 1960s and 70s, he is fondly called Babukka by them.
For about two decades, Baburaj contributed evergreen hits to Malayalam film music. His biography says that when he was young, he used to sing in the streets and on trains to earn a living. The people of Kozhikode believe that his tunes are still present in the streets of the city.
Apparently that is true – you only have to walk along Valiyangadi, one of the biggest markets in Kerala, to believe it yourself. In the remotest corners, from tiny dark rooms, you can hear the soft rhythm of the harmonium and someone humming ‘Oru pushpam maathramen poonkulayil nirthaam, njan oduvil neeyethumbol choodikkuvaan…'
Not just Malayalam, you can hear old Hindi songs like Likhe jo khat tujhe, Pal do pal ka saath hamara and Maine tere liye hi saat rang ke sapne floating in the air, while the market goes to sleep. These songs come from a small room, in which a huge photo of yesteryear singer Mohammed Rafi adorns one wall.
About 10 or 12 people are gathered around, some with harmoniums, some with tablas and other small music instruments. This is the Calicut Kalamandir music club, a place where a few music lovers, most of who work in the market, assemble after a tiring day’s work to sing.
For Salim, a carpenter, Abdul Kareem, a headload worker, Ummer, a timber agent, Muhammed Ali, a collection agent for a cooperative bank, Kunjumon, and many others, this club and its music are a part of life. Most of the club’s members are in their 40s to 60s.
The eldest member is the club’s president 69-year-old Koya, who was an acquaintance of Baburaj. While some of the members have learnt music, a majority haven’t learnt it officially.
Muhammed Ali, the secretary, says the club has been in existence for the last few decades. “We are not sure who started the club, but it has lasted for about 40 years. The venue has changed many times; some members died, some have joined newly, and it goes on,” he says.
For the last 20 years, the members have been gathered in the same room in Valiyangadi. “Here we are mostly Hindustani music lovers, we sing Hindi movie songs by Rafi, Mukesh, Lata Mangeshkar and others,” Ali adds.
Read More

How caste exclusion is threatening a 2000-year-old art...

'Artist Of The Year' Taylor Swift reigns over American...