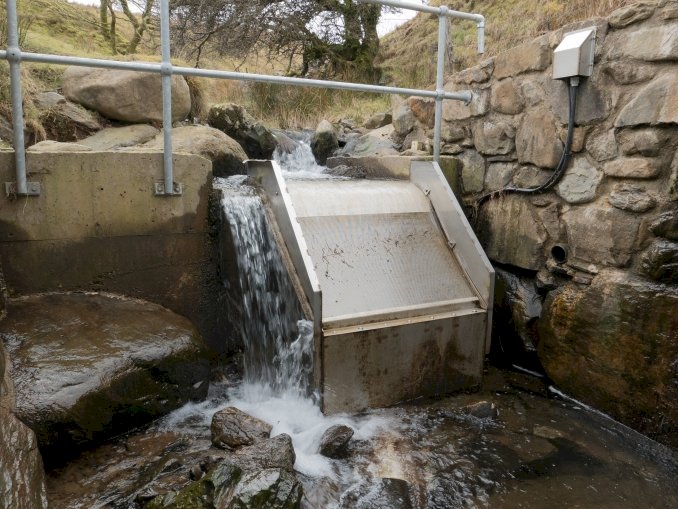 YOU can generate your own electricity in lots of ways. One way that is becoming increasingly popular is microhydropower. The Belgian company Turbulent supplies small hydropower plants that are even suited to household use.

The system is by no means as spectacular as those huge hydropower plants. Nevertheless, the principle is practically the same. Under the motto “small but good,” Turbulent from Leuven, Belgium, is helping people all over the world to generate their own power supply with its mini-power plants.

A Turbulent system comprises the most energy-efficient generator there is, a ‘gearbox’ designed to run 24/7 and an automated sluice to regulate the water flow. Modern technology such as GIS (Geographic Information System) is being used to help determine where the system can be put to good use.

At the heart of the system is a stainless steel vortex turbine. It is well-suited for use in rivers or canals, which have a small gradient and relatively low differences in height.

The CEO of the company founded in 2014, Dr. Walter Buydens, says the company has perfected a long-established technique.

“The technology hasn’t changed much over the years. The Kaplan turbine was invented a century ago. Turbulent’s turbine – developed by co-founder Geert Slachmuylders – takes advantage of the potential energy produced by small vortices. A kind of biomimicry.”

One challenge, he says, is to keep it environmentally friendly, to respect biodiversity and to avoid practical downsides. “The image of hydropower is mainly formed by the major hydropower plants; that’s really massive, with stories about villages having to be relocated and fish migration being disrupted.”

There is none of that with microhydropower provided by Turbulent. Buydens stresses, for example, that fish hardly notice anything. “A fish is not very good at withstanding pressure differences. If that becomes too great as a result of passing through the system, it won’t survive. In our case, that’s about 0.1 bar. That’s negligible.”

Another interesting aspect is that the turbine system is not visually intrusive. Buydens: “It is underwater. There is no visual horizon pollution like there is with the installation of wind turbines, which people sometimes complain about. On top of that, hydropower always works. Power generation is not dependent on the wind, as is the case with windmills.”

However, one of the conditions for a good location is that it involves rivers and other flowing water that can’t run dry. Ideally, the turbine should be placed where there used to be water mills. Near a lock or in irrigation canals, where there is enough space and force to run the turbine.

Low gradient is crucial for hydropower

The crucial thing is the low gradient. “We don’t have much competition in that. A study by TU Delft and the IHE Delft Institute shows that our turbines score best in terms of their efficiency and
environmental footprint.”

This is where the difference between Buydens and others comes in. Besides the large-scale hydropower plants referred to, these are companies that also focus on smaller-scale hydropower generation of energy, but in different ways. The aforementioned Kaplan turbines, he said, create the inevitable noise, unlike the quiet vortex blades. And in turn, another type – Archimedes – also has the disadvantage that its propeller is quite heavy and therefore difficult to transport.

Thank you for sharing this story! However, please do so in a way that respects the copyright of this text. If you want to share or reproduce this full text, please ask permission from Innovation Origins ([email protected]) or become a partner of ours! You are of course free to quote this story with source citation. Would you like to share this article in another way? Then use this link to the article: https://innovationorigins.com/en/small-hydropower-plant-in-stream-behind-homes-becoming-more-popular/

Turbulent is itself facing challenges. For now, strangely enough, things are going relatively better abroad (apart from Europe, which includes the US, South America, Africa and Asia) than they are at home.

“And then in Wallonia, especially in the Ardennes, things are going more smoothly than in the Flemish Region. Sometimes there are difficulties when an intervention has to be carried out. It might be the case that there is a branch of the river that needs to be used. Then you are not talking about locks or a dam that have to be built, but something smaller. Whereas if you build a bypass, you can even improve biodiversity with more surface area for water and greenery.”

What about shipping routes or obstacles? Buydens maintains that these do not pose any problems. “A few years ago in Bali, we have had a large tree stump that was blocking the turbine, but it wasn’t damaged by that. Because the turbuine is made of heavy-duty material; it might even be a bit too heavy.”

Customers are interested in profits
Sustainability is one thing, but what about the level of public interest? Why should interested parties invest in microhydropower, and who are they?

“Customers are small businesses, independent electricity producers who are not only interested for environmental but also for opportunistic reasons. They are able to generate electricity for four cents and sell it for fifteen to twenty cents. So that’s quite a difference.”

The power plants typically have an output of 70kW. Turbines can also be placed in a cluster. “In series, if there is enough of a gradient, and in parallel, if it’s wide enough.”

A typical investment in vortex turbines costs around €200,000. That can be recouped in two to five years. Developments in terms of energy prices only seem to play into the hands of microhydropower producers and by extension Turbulent. “Demand is high. But it takes time to get generators and gearboxes. So that means you have a delivery time of five to seven months.”

Supply to Taiwan
In order to shorten waiting times and build up inventory but also to expand sales, Turbulent is holding an investment round. The company wants to bring in between €2 million and €2.5 million. “Of which we already have €1.3 million in pledges,” Buydens adds.

The most recent success of Turbulent is the supply of green energy to Taiwan’s TSMC, the world’s largest manufacturer of computer chips and semiconductors. Several sites are under development to generate energy via hydropower.

Taiwan is particularly well-suited for this method of energy generation due to high levels of rainfall, numerous existing irrigation canals and hydraulic structures in rivers. Last year, Turbulent sold a total of 390kW of production capacity for the generation of green energy. That should reach 10mW by 2025. Buydens estimates that the total potential for Belgium for hydropower should reach the output of one, maybe even two nuclear power plants.

From access to seating, Kerala film theatres are hardly...

Kerala man, family travel to Europe on a plane he built...