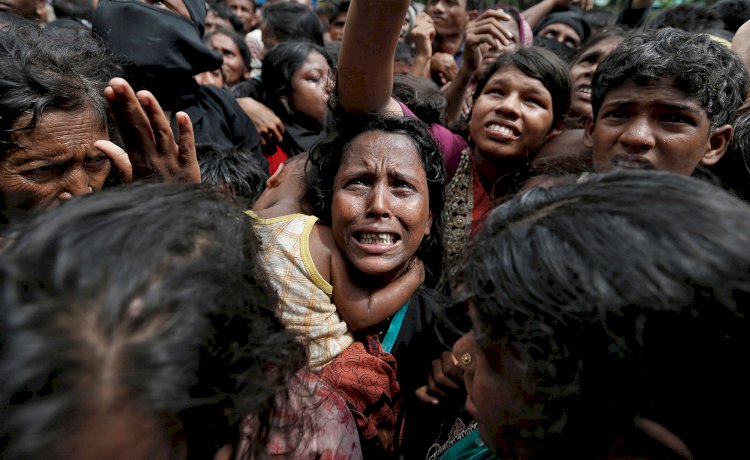 These include the Group of 20 (G-20) Summit on November 15-16 in Bali, Indonesia, and the annual Asia-Pacific Economic Cooperation (APEC) Summit, which will be held November 18-19 in Bangkok, Thailand.

Both follow the Association of Southeast Asian Nations (ASEAN) Summit and related meetings, which will take place November 8-13 in Phnom Penh, Cambodia, and include the East Asia Summit.

The meeting in Cambodia will be the first ASEAN meeting that US President Biden will attend in person as last year's meetings were held remotely due to the COVID-19 pandemic. He will also become only the second sitting U.S. president to visit the country, after President Barack Obama (also for an ASEAN meeting) in 2012.

While in Cambodia, Biden will, according to a White House statement, “explain the importance of advocating cooperation between the US and ASEAN in ensuring security and prosperity in the region, and the well-being of our combined one billion people”.

This is likely to include much reference to ASEAN's important position in Washington's "Indo-Pacific" strategy, and its emphasis on its prized position of 'centrality' in Asian diplomacy.

The crisis in Myanmar will also be central to all these meetings. In preparation, in June 2022, ASEAN Parliamentarians for Human Rights (APHR) launched an International Parliamentary Inquiry (IPI) into the global response to the crisis in Myanmar with the aim of providing strategic, principled, achievable and time-bound policy recommendations to international actors, so that they can better work towards an end to violence and a return to democracy in the country.

Their report, titled "Time is not on our side - The failed international response to the Myanmar coup," was presented at a press conference in Bangkok on Nov. 2.

The IPI is formed by a committee of MPs from seven different countries in Africa, America, Asia and Europe, consisting of IPI President Heidi Hautala (Vice President of the European Parliament), Mercy Chriesty Barends (Member of the House of Representatives in Indonesia and Board Member of APHR), Taufik Basari (Member of the House of Representatives in Indonesia), Amadou Camara (Member of the Gambia National Assembly, and Steering Committee Member of the African Parliamentary Association on Human Rights), Nqabayomzi Kwankwa (Member of the National Assembly Assembly of South Africa, and Chairman of the AfriPAHR), Ilhan Omar (US Congress member), Nitipon Piwmow (MP in Thailand) and Charles Santiago (MP in Malaysia and President of APHR).

The report: "Time is not on our side"

Since the military of Myanmar staged a coup d'état on February 1, 2021, the situation in the country has steadily deteriorated. The military junta, led by Major General Min Aung Hlaing, has waged a brutal war of attrition against its own people, perpetrating countless atrocities and destroying the country's economy.

Armed forces have killed at least 2,371 people and displaced hundreds of thousands, bringing the total number of displaced persons in the country to more than 1.3 million. The junta has also imprisoned more than 15,000 political prisoners and routinely used torture against those arrested. At the same time, they cracked down on freedom of expression and association, including intense repression against independent media and civil society.

Yet the Burmese resisted en masse. The initial peaceful demonstrations in the immediate aftermath of the coup, as well as the Civil Disobedience Movement (CDM) in which hundreds of thousands joined a general strike, demonstrated the population's overwhelming rejection of a return to military rule. The coup has also led to an unprecedented level of unity among those who oppose the military across ethnic borders.

Myanmar's National Unity Government (NUG) was formed in April 2021 bringing together parliamentarians ousted in the coup, representatives of ethnic minorities and civil society actors. The NUG rightly claims a mandate as a legitimate representative of the Myanmar people. It enjoys widespread legitimacy and support, especially in the interior of the country, and represents the most inclusive government in Myanmar's history.

The NUG is committed to the establishment of a new constitution and genuine federal democracy in Myanmar, which would be an important step towards fulfilling the ambitions for autonomy of the country's ethnic minorities.

The junta's attempts to quell the resistance with extreme violence failed dramatically, serving only to exacerbate existing tensions and incite some anti-junta activists to turn to armed struggle to defend themselves. Anti-military militias known as People's Defense Forces (PDFs) - some commanded by the NUG - have been formed across the country, including in previously relatively peaceful areas.

The coup has also sparked a new wave of violence between the military and the Ethnic Armed Organizations (EAOs), which have struggled for decades for autonomy in the country's border regions.

Some of these EAOs, such as the armed wings of the Karen National Union (KNU) and the Kachin Independence Organization (KIO), have joined the NUG. However, not all EAOs have formally joined the anti-military struggle as Myanmar's political landscape remains highly complex and fractured.

The escalating violence has accelerated the near collapse of the economy and an unprecedented humanitarian crisis. Myanmar's GDP has fallen by 13 percent since 2019 and 40 percent of the country's population now lives below the national poverty line. Despite the increased needs, humanitarian actors have struggled to reach vulnerable and remote populations as the military has severely restricted access for humanitarian aid.

The international community has been largely unable to respond effectively to the crisis. The junta's international allies—notably Russia and China—prove steadfast and uncritical supporters, providing both weapons and legitimacy to an otherwise isolated regime.

However, foreign governments that support democracy have not supported their rhetoric with the same force. While a number of countries have imposed sanctions on junta leaders and their personal assets, these efforts remain uncoordinated and have failed to crack down on key revenue-generating entities such as the Myanmar Oil and Gas Enterprise (MOGE).

The United Nations, in particular, is hampered by internal divisions and appears unable to exert any influence. The NUG has attracted supporters worldwide and continues to occupy Myanmar's seat at the UN, but most governments are hesitant to formally recognize them, despite calls from parliaments and advocates to do so.

The Association of Southeast Asian Nations (ASEAN), of which Myanmar is a member, is also plagued by internal divisions and has been unable to respond effectively. The bloc's five-point consensus, signed in April 2021 and aimed at tackling the crisis, has failed completely, hampered by a lack of will on the part of all ASEAN member states to enforce it, and a military leadership in Myanmar that has shown no intent to implement it.

While some member states, such as Malaysia, have called for new approaches, including direct involvement with the NUG and other pro-democracy forces, others, including Thailand or Cambodia, remain "junta enablers."

As Myanmar slides into civil war, the possibility for a negotiated solution to the conflict is almost completely closed. The dialogue prescribed in ASEAN's five-point consensus is impossible under the current circumstances.

The responsibility lies with the junta, which has shown no willingness to engage with those who oppose it and has instead relied solely on brute force in its effort to wipe out any opposition.

The July 2022 execution of four political prisoners, the country's first judicial execution since 1988, highlighted both the brutality of the military and its complete disinterest in negotiations. The coup unceremoniously brought an end to the previous power-sharing arrangement with the civilian leadership. Now the vast majority of Myanmar's population has expressed a clear desire not to return to the status quo of the past.

The military junta has failed to consolidate its power

Nineteen months after the coup, the military junta has failed to consolidate its power. This is also apparent from a recent report by Noeleen Heyzer, the UN Secretary General's Special Envoy for Myanmar. Large parts of Myanmar's territory are disputed between the military and forces affiliated with the NUG or EAOs, and it can be argued that the coup has failed.

In areas along the Thai border, EAOs are working together, providing basic services to the population. That way one is showing what a future Myanmar, in which different groups will work together instead of fighting each other, looks like.

With Myanmar's future at stake, external pressure on the military and support for the resistance could be the deciding factor in the course of the conflict. The international community can and must do more to help the Myanmar people establish a federal democracy.

It should begin significantly increasing efforts to address the worsening humanitarian crisis, increasing pressure on the illegal junta through coordinated sanctions and arms embargoes, and recognizing the NUG as the legitimate authority in Myanmar.

The NUG, as well as the aligned EAOs, should be provided with funding and capacity building programs in governance and federalism. But urgent action is needed because, as Khin Ohmar, Myanmar activist and chairwoman of the Progressive Voice, said at one of the IPI hearings: "Time is not on our side".

The countries and international institutions that claim to support democracy in Myanmar must act urgently. If they are serious about helping the Myanmar people in their hour of greatest need, they must adopt creative and effective policies to provide support and pave the way for a better future for the country.

Min Aung Hlaing's junta has failed to take control of the country, but pro-democracy forces cannot drive the military out of Myanmar's political life on their own. The forces fighting for federal democracy need all the help they can get from allies in the global community.

The International Parliamentary Inquiry (IPI) makes a number of recommendations that focus on the urgent need to increase humanitarian assistance to Myanmar, to urge neighboring countries (notably Thailand, India and Bangladesh) to provide more cross-border humanitarian aid and to work as much as possible directly with local, community-based aid groups, and not with the junta.

Pressure on the junta must also be increased, through coordinated and genuinely impactful sanctions. For instance, by calling on governments that have not yet sanctioned the Myanmar Oil and Gas Enterprise (MOGE), especially the United States, to do so as soon as possible.

At the same time, Myanmar’s pro-democracy forces – including the NUG and ethnic organizations– should be recognized and given the political and financial support they need. The NUG and EAOs should start negotiating a future settlement for a federal democracy in Myanmar.

The NUG should also be encouraged to unconditionally restore Rohingya citizenship and accept the return of those who have sought refuge in Bangladesh over the years.

One should acknowledge that the five-point consensus has failed and that Min Aung Hlaing's junta is not a reliable partner. ASEAN must abandon the five-point consensus in its current form and negotiate a new agreement on the crisis in Myanmar with the NUG, local civil society organizations (CSOs) and representatives of ethnic armed organizations (EAOs).