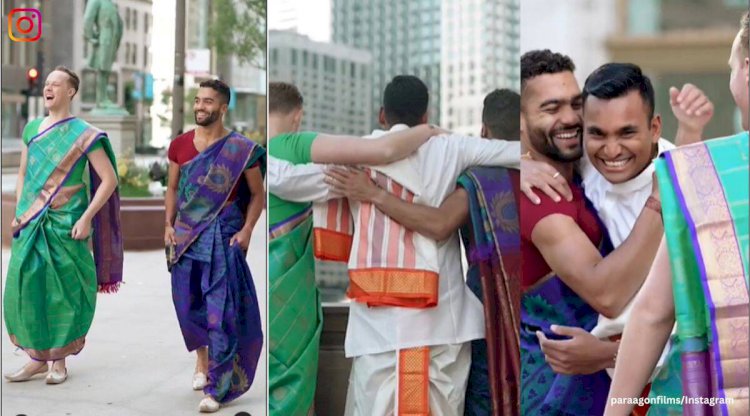 IN an effort to shatter gender stereotypes, two men in the state of Chicago, US, hit the headlines for sporting sarees and bindis at an Indian friend's wedding.

In the clip shared by Paraagonfilms, a group of Chicago-based wedding videographers on Instagram, the men can be seen confidently donning the traditional Indian attire of Saree and complimenting it with a bindi as they attended the event with grace.

As the two men walked down Michigan Avenue, the groom noticed them and was seemingly amused as he burst out in laughter.

The clip also shows how the two men, one among them white, draped the saree with some assistance. A person could be seen helping the white man, who chose to wear the green coloured saree, with the pleats.

His colleague meanwhile donned the purple saree as both the men smiled and appeared delighted to be able to dress up in the clothing of their personal choice. The two men are the groom's 'best men' and decided to ace an Indian look as they walked the bride.

With times changing, men have been involved in breaking the gender norms such as an American robotics engineer in Germany and a dad of three who once wore pencil-high heels and skirt to work because 'clothes have no gender.'

On his Instagram, Mark Bryan gets into women's clothing as per his choice and pairs his get-up with towering heels to break free from the gender role.

'I am just a straight, happily married guy,' Bryan explained in his Instagram bio, adding that he 'loves Porsche's, beautiful women and incorporating high heels and skirts into my daily wardrobe.'

Dressed in suede boots, beige blocks, red stilettos, paired with a red pencil skirt, and on other days plaid miniskirts, the 61-year-old aces the look straying away from fitting into a gender stereotype.

Bryan's way of dressing is aimed at neutralizing the 'strong masculine imagery' of men that finds males' portrayal of emotions, empathy, grief, modesty, etc as troubling by the society that largely discourages it. Besides, men who 'act or behave' like women were evaluated as less agentic as they were expected to appear strong and tough.

Decarbonising the energy system by 2050 could save trillions

Musk's mum says she 'sleeps in garage' when she visits...