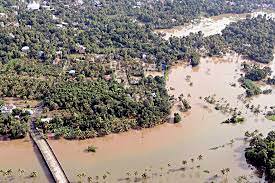 WHEN it comes to addressing issues, Kerala has always led from the front. When it comes to climate change, with all the challenges it poses, the state has been coming out with pioneering efforts through short, medium and long-term plans.

One reason why the state government has stepped up efforts on this crucial issue is because over the last few years climate variations and frequent natural disasters such as floods, coastal erosion, heat waves, temperature-induced health impact, drought and landslides have all posed serious challenges to the economic development of Kerala.

The vision of the Kerala government is to develop programmes and projects which are environmentally feasible, economically viable and climate resilient but locally demanded. This is also related to the Sustainable Development Goal (SDG) 13 and indicator 13.1.3 which focuses on the proportion of local governments that adopt and implement local disaster risk reduction strategies in line with national strategies.

The long-term goal has already been laid as Kerala aims to achieve carbon neutrality by 2050 and to develop the environment budget in 2023.

And to achieve the long-term goal, the Kerala State Action Plan on Climate Change (SPACC) drafted by the Directorate of Environment and Climate Change (DoECC) along with other departments, agencies and institutes was endorsed by the Central government in 2014.

The state government also set up a Climate Change Cell at the DoECC to coordinate, manage and monitor climate action while building the capacities of government officials and LSGs.

First off the block was the Kerala Fisheries Department which accessed Rs 25 crore from the National Adaptation Fund on Climate Change (NAFCC) for "Promotion of integrated farming system of Kaipad and Pokkali in coastal wetlands of Kerala."

While the state went forward falling in line with the national policies and framework, the Local Self-Government Department spearheaded innovative steps to intensify climate action and disaster management at the grassroots level.

Also, the Climate Change Innovation Programme (CCIP) in collaboration with the Kerala Institute of Local Administration (KILA) trained gram panchayats in four hotspot districts to prepare Local Action Plan on Climate Change. It was later included in the guidelines of the 5-year plans by the local self-government department.

A project called Nammal Namukkay ("we for us") was launched to enable all the 941 grama panchayats in the state to prepare Local Disaster Management Plans in 2019-20.

The local governments have been asked to include projects of disaster management and mitigation in their annual plans considering their susceptibility to natural disasters as well as their existing capacity to tackle it. Under this programme training was given to local government elected representatives, functionaries and community members by KILA.

Post-2018, when the state witnessed the worst-ever floods in a century, the government constituted the 13th Working Group for Biodiversity, Climate Change, Environment and Disaster Management in all local government institutions to aid in local-level planning.

As per the Kerala Panchayati Raj Act, 1994 it is mandatory for each local self-government to constitute working groups for different sectors.

To catalyse the rebuilding of Kerala (post the 2018 floods), the government launched the Rebuild Kerala Development Programme (RKDP) in a way that addresses key drivers of floods and other natural disasters and climate change risks and strengthens preparedness against future disasters.

Through the RKDP, the government aims to ensure a resilient recovery and development pathway for a ‘Nava Keralam' (New Kerala). The Rebuild Kerala Initiative of the RKDP, supported by the World Bank focuses on the Pamba river basin districts, Alappuzha, Pathanamthitta, Kottayam and Idukki, to build climate resilience and disaster management through the Program for Results (PforR).

Risk-informed master plans,localisation of weather forecasting, and augmentation of disaster response capability and strategic climate action are some of the results that are to be arrived at through the programme.

An innovative action to combat climate change was initiated by the Meenangadi grama panchayat of Wayanad district to move towards carbon neutrality.

In order to achieve climate change-resilient infrastructure, the state government now promotes the construction of prefabricated homes to save on finite natural resources such as granite, timber, clay, and river sand.

Also, under the Global Environment Facility (GEF) and the UNDP-funded High Range Mountain Landscape the project has restored more than 150 ha of degraded forest into grassland and shoal vegetation thereby enhancing carbon sinks and models for comprehensive waste management with co-financing support from state and private stakeholders.

Climate [email protected] 2050: Why Mumbai may get that 'sinking feeling'