Climate [email protected] 2050: Why Mumbai may get that 'sinking feeling' 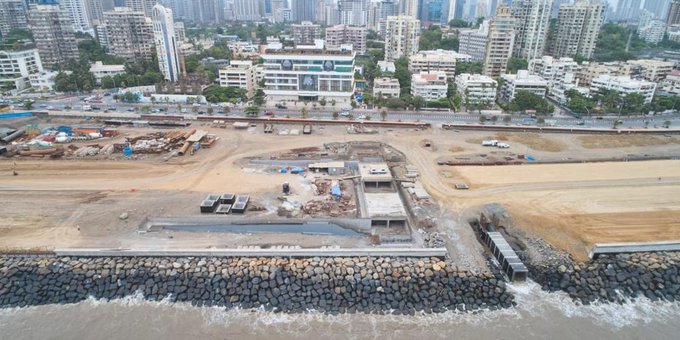 WITH the country's commercial capital listed among 12 coastal cities that would face the onslaught of global warming coupled with rising sea-levels, several parts of south Mumbai are predicted to 'sink' in the Arabian Sea by 2050, with enormous economic implications, experts and recent studies have indicated, report online news sites quoting IANS.

As per the Intergovernmental Panel on Climate Change (IPCC)'s 6th Assessment Report (AR6) released in 2021, not only Mumbai but large parts of hinterland Maharashtra could also be ravaged by the mercury rising phenomenon being witnessed worldwide.

Among other things, the IPCC has pointed fingers at the upcoming Coastal Road Project, rising sea levels and flood damage.

The CRP, intended as an infrastructure initiative to reduce flood risk and protect against the rising sea level, ironically may cause damage to inter-tidal flora and fauna besides hitting fisherfolks.

Sea-level damages in the city are estimated to touch up to $50 billion in the next three decades and almost triple by 2070, and another study forecasts the costs only to Mumbai at a staggering $162 billion per year by 2050, said Dr Anjal Prakash, one of the climatologists/scientists who authored the IPCC's macabre forecasts.

Floods, which have shown an increase in recent times, would hit people in different ways including lost or damaged homes and Mumbai is among the 13 Asian cities of the global 20 urban centres which would experience huge losses due to inundation, as per the IPCC.

If Mumbai goes down, its impact will be felt on the rest of Maharashtra too, said Prakash.

These would trigger heat waves and droughts in eastern Maharashtra, especially Chandrapur which has recorded up to 48C temperatures last year, plus, floods in Mumbai, Kolhapur, Pune, Sangli, and parts of Vidarbha in 2019 and later.

The devastating Cyclone Tauktae (May 2021) alone killed 21, damaged 2,542 buildings, shut Mumbai Airport for nearly 12 hours and other devastation in the coastal Konkan region.

The prime culprits for the greenhouse gas emissions in Maharashtra are: energy and power sector (48 per cent), industries (31 per cent), transportation (14 per cent), domestic fuel (3 per cent), agriculture (2 per cent) and other causes (2 per cent), said Dr. Prakash.

If the IPCC's predictions of world warming by 2C-2.5C degrees proves true, it will hit Maharashtra's coastal areas badly, including submerging parts of Mumbai and Konkan coast, extreme droughts in Vidarbha and major forest fires across that will add to the Greenhouse emissions.

To date, Nanded, Beed, Jalna, Aurangabad, Nashik and Sangli districts have been most impacted by extreme weather and over Rs 1,000 crore has been paid in compensations by 2021.

As per the State Environment & Climate Change Department's figures, The state has coughed out Rs 21,068 crore to victims of Climate Change-related floods, hailstorms, cyclones and unseasonal rains losses in 35 districts since 2016 though the drought-related compensation data is not available.

To adapt to these changes, Mumbai and other coastal megacities would need a mix of strengthening the green and blue infrastructure, the scientist said.

Speaking about the IPCC, the BrihanMumbai Municipal Corporation (BMC) chief I.S. Chahal had warned that by 2050, nearly 80 percent of south Mumbai's prime A, B, C, D wards -- comprising posh residential and commercial districts like Cuffe Parade, Colaba, Nariman Point, Churchgate, Fort - would be submerged, sending shockwaves among the city's elite.

Besides, adjoining areas of Marine Drive, Girgaum, Breach Candy, Umarkhadi, Mohammed Ali Road, which is world-famous because of its annual Ramadan food markets -- and surroundings would also be swallowed underwater due to the climatic change.

Chahal's chilling forecast came at the launch of the Mumbai Climate Action Plan website in the presence of ex-Environment Minister Aditya Thackeray and other dignitaries.

In February 2021, McKinsey India said in a report that by 2050, Mumbai will witness a 25 per cent increase in the intensity of flash floods accompanied by a half-metre rise in the sea level, which could hit around two-three million people living "within a one-km radius of the city coastline".

India soon to get unmanned trains

Why fish are disappearing from Amazonian waters